Harvard researchers have created a new lens material that is much thinner than glass.

It’s made up of microscopic nanopillars arranged in a thin array to focus light very precisely to avoid blur, which can happen with glass lenses.

The ultra thin metal lens could have many applications and lead to lighter, less bulky lenses in cameras, phones and glasses. 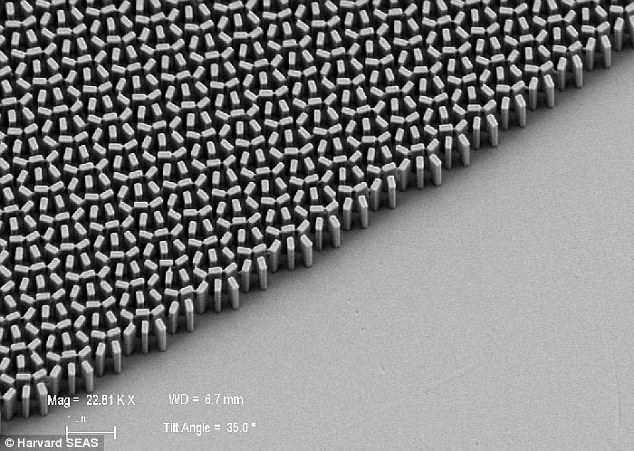 The researchers used titanium dioxide to create the nanopillar array. These nanopillar structures (pictured) allow the lens to focus wavelengths of light from 490 nanometers to 550 nanometers – the blue to green spectrum – without any blur in the images

The team that developed the nanomaterial announced their first version of it during the summer of 2016 – but that lens could focus only one color at a time.

So if it were used in a camera, it could only take photos in one color at a time.

But the researchers revised the material so that it can work within a continual spectrum of colors from blue to green – close to the spectrum of an LED.

The metal lenses have the potential to produce images in much higher detail than normal glass lenses.