It may only have been a tiny error by surveyors 277 years ago, but it could have stirred up major problems.

Part of the small community of Lake Wylie, South Carolina could today find themselves reclassified as being in neighboring North Carolina.

Modern surveyors – using state of the art GPS – have redrawn the state border to within a few inches of where it had originally meant to be in 1735 – some 150ft further south of where it is today.

But the change could be a monumental upheaval for the hundred or so residents who would find themselves residents of North Carolina – where fuel prices are 30 cents more expensive and fireworks are illegal.

Victor Boulware, owner of a small convenience store, the Lake Wylie Minimarket, says a change would destroy his business, stopping the flow of traffic from the more expensive north who flock to his shop for the cheaper fuel.

He said: ‘If I end up across the line, it is going to shut this business down.’

For the owners of 93 properties who suddenly find themselves in another state, it is also a bureaucratic nightmare.

The state line determines so much in their lives – what schools they go to, what area code their phone number starts with and even who provides them gas and electricity.

Small utility cooperatives in South Carolina are banned from extending services across the state line. Most of the properties in question are near Charlotte, N.C.

“I’m having a hard time being funny about this when mysterious forces bigger than you are shoving you around,” said Frederick Berlinger, who suddenly has been told that he goes to bed at night in Spartanburg County, S.C. after 15 years in what he thought was Polk County, N.C.

The seeds of the current problem were sown when the King of England sent surveyors to draw a boundary between the two Carolinas.

His instructions in 1735 were explicit: Start 30 miles south of the mouth of the Cape Fear River and have surveyors head northwest until they reached 35 degrees latitude.

Then the border would head west across the country to the Pacific Ocean. But the surveyors didn’t follow the instructions exactly, and future instructions led to the state line’s twists and turns around Charlotte and in the mountains.

The surveyors used poles and measured chains, determining what direction to head from the sun and stars, doing math in their heads, and putting hatchet blows on trees to mark the boundary. Over time, those trees disappeared, but the state line still needed to show up on maps.

The survey, which is about to draw to an end, was designed to put almost all questions about where the line is drawn to rest.

North and South Carolina wanted to solve their problems with a little Southern cooperation, so they created the Joint Boundary Commission nearly two decades ago. 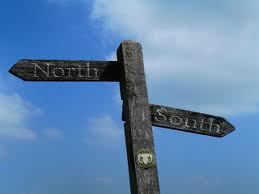 Once both Carolinas take action to make the transition easier for the 93 property owners, the commission will submit the new state line to the Legislature in South Carolina and the North Carolina Council of State for approval.

Not approving the border could open either state up to a number of lawsuits.

The survey work is not finished. The team is preparing to draw the rest of the state line all the way to the Atlantic Ocean. Fewer problems are expected because the area is more rural.