If you’re too lazy to cook, help is at hand.

Kawasaki has revealed its latest robot is a dab hand in the kitchen – and can make everything from pizza to sushi.

Showing off the new two-armed duAro robot at an event in Tokyo, the firm even programmed it to dispense drugs and draw portraits. 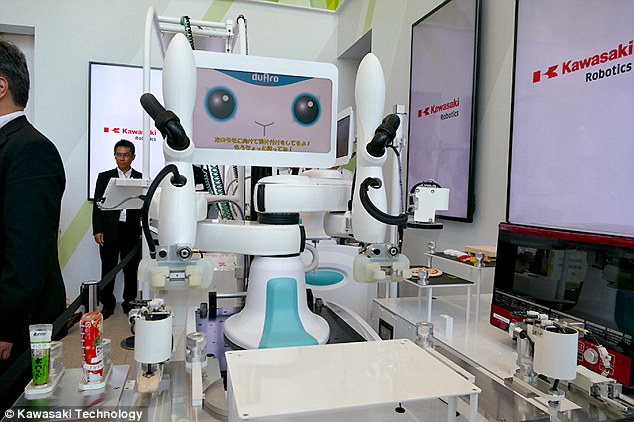 Using a robot named ‘duAro’, the Japanese firm has developed machines that make pizza, draws portraits and dispense pharmaceuticals, giving visitors a taste of a human and robot relationship

WHAT CAN DUARO DO?

Kawasaki Robotics ‘duAro’ is an innovative & new, dual-arm SCARA robot that can coexist with humans in the workplace.

The firm is showcasing this innovation at its  ‘Kawasaki Robostage’ in Tokyo, Japan.

Visitors are greeted with a duAro receptionist that can print out brochures with their native language.

Another robot is just around the corner that can make pizza pies and intricately construct small pieces of sushi.

Since the pharmaceutical industry has been slow to adopt robotics, Kawasaki demonstrates the accuracy and efficiency of using three robotic arms to dispense drugs.

DuAro can also draw any portrait it is given.

The ‘Kawasaki Robostage’ showroom is connecting human creativity with Kawasaki Robotics technologies that will one day be employed in the food sector electronic and electric fields.

Since starting its industrial robot production in 1969, Kawasaki has contributed to the automotive, electronic, semiconductor, medical and other areas in Japan and across the globe.

The firm has opened robot showrooms in the past, however the exhibit in Tokyo is aimed at both companies looking to adopt robots into their workforce and for the public to understand them better.