Researchers have developed a breakthrough technique that enables them to build ‘invisible’ materials out of light.

The method uses light like a needle to thread long chains of particles.

And, the scientists claim, it could be an important step towards building invisibility cloaks. 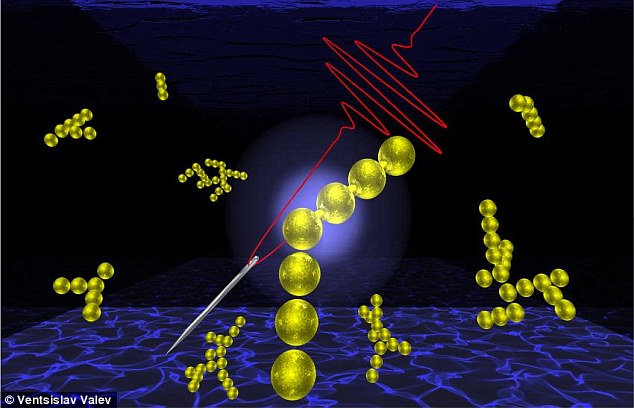 Scientists at the University of Cambridge have developed an ‘invisible’ metamaterial. They say their technique can be scaled up to cloak large objects. This image depicts an efficient route to manufacturing nanomaterials with light through plasmon-induced laser-threading of gold nanoparticle strings

The research, published in the journal Nature Communications, describes how engineering materials at a nanoscale level can induce invisibility.

Materials just a few billionths of a metre across can be built to alter the way in which light passes through them.

Known as a ‘metamaterial’, these can be designed to reflect light in the ‘wrong’ way.

A metamaterial is an artificial material that has been engineered to have properties different to those found naturally in nature.

WHAT IS A METAMATERIAL

According to the Institute of Physics, metamaterials can bend electromagnetic radiation such as light around an object to give the appearance that it isn’t there.

To date some researchers have used such properties of metamaterials to create devices that can bend certain forms of radiation such as near-infrared radiation.

So far, however, producing the same effect with visible light has proved more of a challenge.

This technique involves stitching gold nanoparticles together in long strings, which is achieved by using unfocused laser light as a ‘needle’.

These strings are then stacked in layers on top of one another, allowing materials to be made in high quantities.

When light is shone upon an object it is either reflected or absorbed, dictating how it appears to a human eye.