A Chinese woman who wore a fake baby bump to  trick subway passengers into offer her a seat tried to land the manufacturer in  trouble after it fell out on a crowded train.

The Beijing woman complained about the  quality of the silicone belly after being left red-faced and has been branded a  ‘disgrace’ and ‘shameless’.

The woman, named by local media as Zhang,  told the Liyuan Industrial and Commercial Bureau that the belt tying the bump to  her waist had come loose, leaving her ‘found out and mocked’. 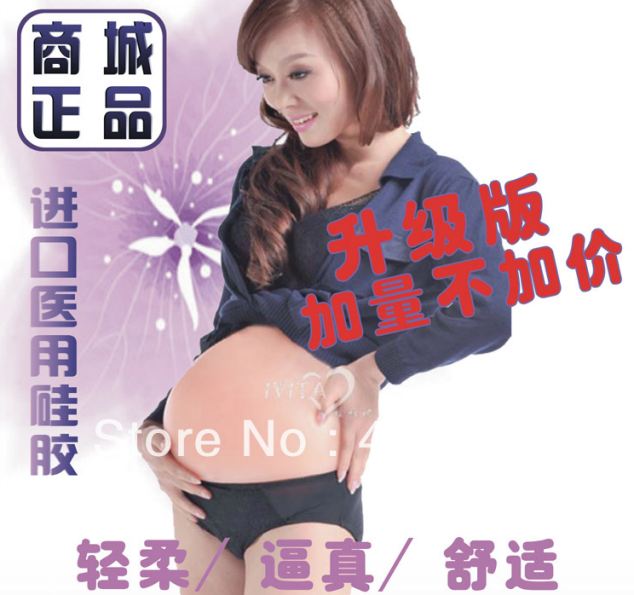 A Chinese advert for a silicone baby bump,  similar to the one used by a woman to get a subway seat

Zhang complained that the belly had cost her 300 yuan ($53) and was advertised as ‘very realistic’.

But the bureau has thrown out her complaint because she had not ‘purchased or used commodities, or received services, as a consumer should for daily use’.

More than 2.1 million people use the subway in the Chinese city, and popular opinion is firmly against the woman’s stunt.

The People’s Daily asked ‘who exactly shows the poor quality’, while a report in Want China Times bemoaned the fact such  pregnancy bellies are big online sellers.

It added: ‘Shoppers use the items – among  other reasons – for faking a pregnancy before adopting a child to avoid being laid off at work, and to enjoy privileges to which pregnant women are  accustomed.

‘Sizes include approximations to a belly at two to four months, five to seven months, and eight to 10  months.’

The newspaper also reported a woman spending  1,300 yuan ($210) on a set of fake bellies to help her and her husband’s plan to adopt a baby and claim it was their own.

It also said a woman at a marketing  firm in Chongqing used fake bellies to cover up her ‘lackadaisical  business performance’ but was fired when her boss found out.