1)
The artist tried to concentrate on his work, but the attraction he felt for his model finally became irresistible. He threw down his palette, took her in his arms and kissed her.

She pushed him away. “Maybe your other models let you kiss them,” she said.

“I’ve never tried to kiss a model before,” he swore.

“Really?” she said, softening, “How many models have there been?”

2)
A lawyer walks into a bar and sits down next to a drunk who is closely examining something held in his fingers. The lawyer watches the drunk for a while till he finally gets curious enough to ask what it is.

“Well,” said the drunk, “it looks like plastic and feels like rubber.”
“Let me have it,” said the lawyer.

Taking it, he began to roll it between his thumb and forefinger, examining it closely.
“Yes,” he finally said, “it does look like plastic and feel like rubber, but I don’t know what it is. Where did you get it?”

“From my nose,” the drunk replied.

3)
This Pun is so bad it must be shared!

Some friars needed to raise more money for books for the school, so they opened up a small florist shop to raise funds. 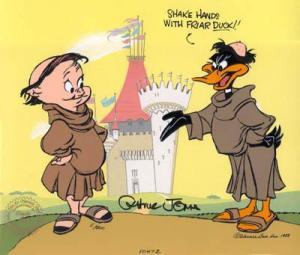 Since everyone liked to buy flowers from the men of God, a rival florist across town thought the competition was unfair.

He asked the good brothers to close down, but they would not. He went back and begged the friars to close. They ignored him.

So, the rival florist hired Hugh MacTaggart, the roughest and most vicious thug in town to “persuade” them to close.

Hugh beat up the friars and trashed their store, saying he’d be back if they didn’t close up shop.

Terrified, they did so, thereby proving that “Only Hugh can prevent florist friars.”