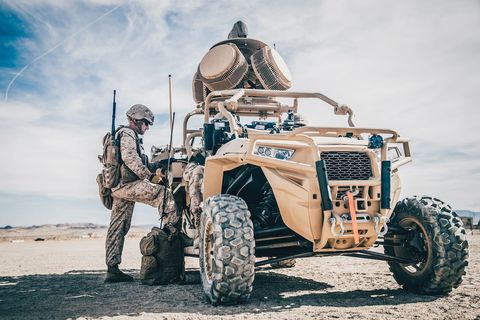 The U.S. Marine Corps used a new portable jammer system last week to jam an Iranian unmanned aerial vehicle, forcing it to pitch into the sea. The new Light Marine Air Defense Integrated System (LMADIS) jams the signal between drones and their operators, leaving them at the mercy of physics, and inevitably, gravity.

The incident took place in the Strait of Hormuz, which connects the Gulf of Oman to the Persian Gulf. The 11th Marine Expeditionary Unit, embarked on the amphibious assault ship Boxer, parked a LMADIS jammer on the Boxer’s flight deck to provide a defense against Iranian UAVs known to operate in the area. The marines detected an Iranian unmanned aerial vehicle and jammed it when the drone closed to within 1,000 yards of the Boxer.

A LMADIS system parked on the flight deck of the USS Kearsage while crossing the Suez Canal, January 2019.

LMADIS engagement procedure goes something like this: the RPS-42 detects the drone on radar, or alternately Skyview detects the back-and-forth radio signals between the drone operators and the drone itself. Next, the electro-optical/infrared camera is trained on the incoming drone to make a positive identification as friendly or hostile. If hostile, the Marines aim the MODi jammer at the drone and prevent the drone operators’ radio commands from reaching it. Gravity takes care of the rest.