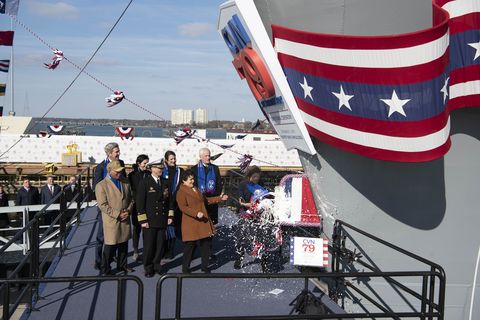 The future USS Kennedy is the second ship to bear the President’s name and the second Ford-class aircraft carrier.

The ceremony was held at Huntington Ingalls Industries’ Newport News Shipyard in Virginia. Kennedy is a member of the new Ford-class of aircraft carriers, which will replace the Nimitz-class carriers currently serving with the U.S. Navy. Kennedy will replace the Nimitz sometime in the early to mid-2020s. USS Nimitz is the oldest carrier in the Navy, having served continuously since May 1975.

The big carrier is not yet officially part of the U.S. Navy. Kennedy’s drydock was recently filled with water, allowing the ship to float on its own. Although the ship is structurally complete, it’s basically empty inside, so the shipbuilders will spend the next few years fitting it out. After that it’s shipbuilder’s trials, with contractors taking the ship to sea to test major equipment.