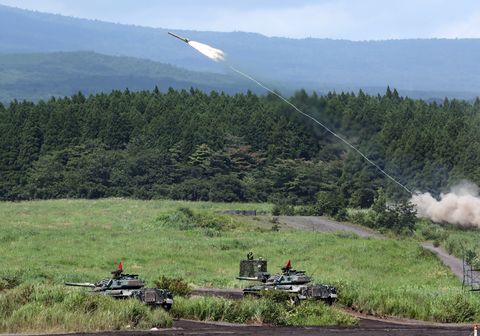 Japan’s military, which has spent decades focused solely on self-defense, is making a new kind of weapon to deliver an explosive payload at supersonic speeds. The unconventional tech is designed to soften up enemy defenses with precision strikes before Japanese marines hit the beach, in a bid to help the country take back territory seized by potential adversaries in the future.

The “high speed gliding missile” fills the hole of long range precision attack in Japan’s defense capabilities. The weapon consists of two stages: a booster rocket stage, which accelerates it to supersonic speeds, and a second aerodynamic warhead that separates from the booster and glides the rest of the way to the target.

There is nothing like the HSGM in service anywhere. Although several countries field tactical ballistic missiles, including Russia’s 9K720 Iskander tactical ballistic missile and South Korea’s Hyunmoo 2A ballistic missile, both deliver their warheads using high altitude ballistic trajectories. Japan’s missile, on the other hand, probably glides to target at a lower altitude. In fact, HSGM sounds a lot like a boost glide hypersonic weapon system, which flies a similar profile (but at speeds exceeding Mach 5).