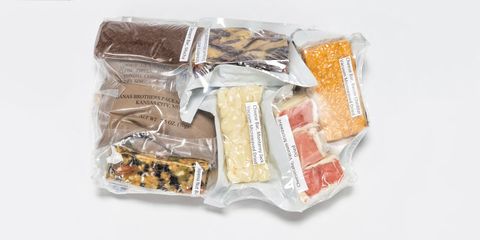 The entrance to the U.S. Army Natick Soldier Systems Center is busy and confusing. Based on how much the soldier at the gate my Uber driver and I pulled up to was shouting at us, we were not doing a great job of navigating that entrance. But after a few phone calls and with the help of our escort for the day, I was finally on my way down the long path to the correct building.

Natick is an Army base where the military scientists at the forefront of the development of food systems for all of the armed forces (as well as NASA!) are developing new technologies like sonic agglomeration, vacuum microwave drying, and sonic swab technology. The part of Natick I wanted to visit is a warehouse full of super-cool machines that will potentially help our soldiers be able to do their jobs better, by feeding them foods that are packed with calories, nutrients, and flavor, but without weighing a ton or taking up much space.

And they’re doing all of this while maintaining vitamin integrity so that soldiers and even astronauts can eat that food, be full, and also be healthy. As a chef, I spend all of my time trying to make food delicious, comforting, and entertaining, while keeping the process simple enough for my cooks to be able to complete orders in a timely fashion. I wanted to find out how the scientists and engineers at Natick do all of those things, only with an added priority: making the food last for three years without refrigeration.

I was led into a large open room full of machinery and equipment that looks intense, but on closer inspection is a lot like regular, though super-large, kitchen equipment. And it smelled good in there. Like they were baking cinnamon buns and casseroles and… Anyway, let’s talk about science!

Much of my day was spent learning about the Close Combat Assault Ration. Soldiers have always needed portable rations because, well, humans eat food, and they’re not always camped out at a base with a mess tent and a cook. Those rations need to be nonperishable, lightweight, and small enough that a soldier can carry enough food for a mission that could last several days. But no matter how small and light field rations get, they can always be smaller and lighter.