A supernova remnant 170,000 light years away in one of the Milky Way’s galactic neighbors. This image, taken by the Hubble Space Telescope, shows ambient gas being shocked by the expanding blast wave from the exploding star 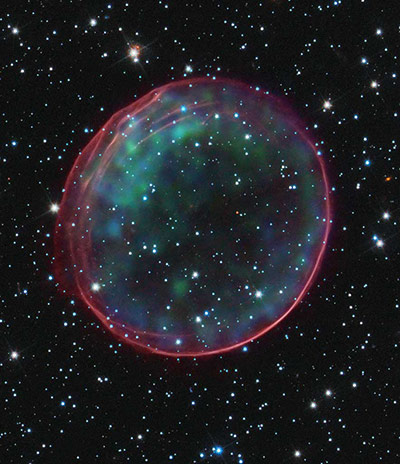 Sand dunes trapped in an impact crater in the Noachis Terra region of Mars. The area covered in the image is about 1km (1100 yards) across. Sand dunes are among the most widespread wind-formed features on Mars. Patterns of dune erosion and deposition provide insights into the sedimentary history of the surrounding terrain. This picture is from the High Resolution Imaging Science Experiment (HiRISE) camera on board the Mars Reconnaissance Orbiter

Nasa captured this dramatic image of a solar flare on 2 January. To view a video of the event click here. The show lasted about three hours, but the blast was not directed at Earth

Solar flares on 23 January enhanced the aurora borealis in the skies over the frozen Susitna River near Talkeetna, in Alaska