We are often urged not to judge a book by its cover when meeting someone new, but scientists have found a way to alter how you might feel about someone by tweaking your response to their face.

Researchers have developed a technique that allows them induce either positive or negative feelings about other people’s faces.

They were able to get participants in the study to feel more warmly towards faces of people they had never met before or less keen on other faces at will, all without those taking part realising they were being manipulated. 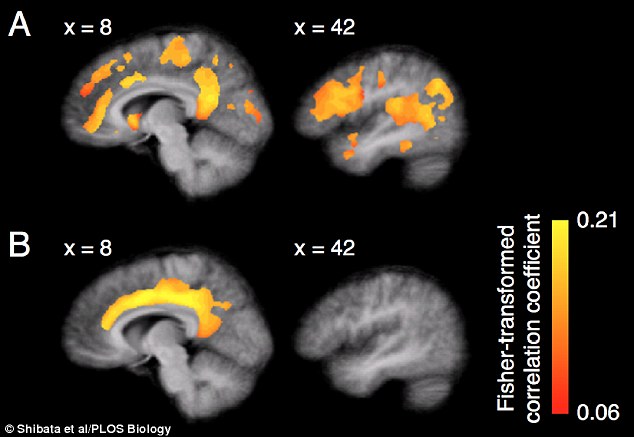 Scientists have developed a technique that allows them to identify brain activity associated with specific emotional responses (some examples above). They showed they could then promote this activity in participants by rewarding them whenever it appeared

According to the scientists, the study could lead to new ways of treating people suffering from traumatic memories, but it also has the potential to be misused as a form of brain washing.

The researchers used MRI scanners to identify specific patterns of activity in a region of the brain called the cingulate cortex.

This area is responsible for handling emotional feelings.

Using decoding software, the scientists were able to pick out specific brain activity that related to negative feelings or positive feelings related to a stranger’s face.

They then gave the volunteers a task where they were shown faces briefly before being asked to do something for a reward.

However, the participants were unknowingly rewarded only when their brain activity matched the emotion that the researchers wanted to promote.

When the volunteers were shown the same faces later, their feelings towards them had shifted.

Professor Takeo Watanabe, a cognitive scientist at Brown University in Providence, Rhode Island, said: ‘If someone develops a traumatic memory that makes him or her suffer, even a small reduction of the suffering would be helpful.’

It is the second demonstration of the technique, which the researchers call decoded neurofeedback, or DecNef for short, this year in training a mental process.

Earlier this year the same team used it to associate certain colours with patterns so strongly that volunteers saw the colour even when it was not there.