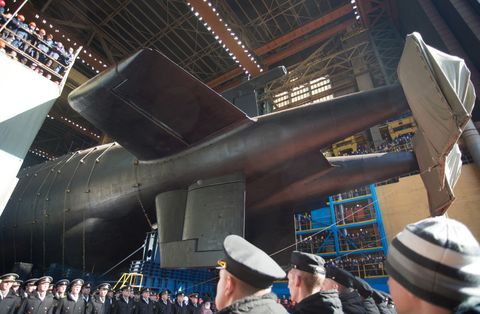 Russia launched the world’s longest submarine today, the special mission submarine Belgorod. Designed to support a variety of military missions, including the Poseidon long-range strategic nuclear torpedo, the sub is far larger than anything operated by any other naval force, including the U.S. Navy. The six hundred foot long submarine displaces more water than a World War I battleship and can dive to a depth of 1,700 feet.

The submarine was launched today, April 23rd, at the Sevmash shipyards in Russia, with Russian President Vladimir Putin reportedly watching via satellite.

Officially known as Project-09852, the submarine was originally an Oscar II-class cruise missile submarine that the Russian government ran of funds to complete. The submarine hull sat unfinished until Moscow decided to complete it as a special mission submarine.

The hull was lengthened to approximately 184 meters (604 feet) and the ship’s displacement ballooned to 30,000 tons submerged–more than fifty percent greater than the U.S. Navy’s Ohio-class ballistic missile submarines. The result of an unfinished hull the Belgorod is a one-off, and there will not be another one like it.