The Kanzius Cancer Research Foundation is currently helping conduct medical research in an effort to find a better way to treat cancer without the harmful side effects associated with current treatments.

The Center’s founder, John Kanzius, just may have found it.

The treatment is completely revolutionary and fairly straight forward. It is totally non-invasive & is said to have zero, yes I said zero, side effects. It uses radio waves to literally cook the cancer & kill it without harm to the surrounding tissue.

Mr. Kanzius was not a doctor, nor a scientist. He was just a man, a broadcast engineer, with a rare form of cancer, who by necessity, thought outside the box.

John died on February 18, 2009. His Foundation continues his research.

Just this past November (2011), NCI (National Cancer Institute) examiners toured the KCRF (Kanzius Center Research Foundation) lab for the second time and declared the Kanzius Noninvasive Radiowave Cancer Treatment to be “exciting and very promising.” I thought it was exciting & very promising 3 years ago?

Meanwhile people are dieing everyday of horrific forms of cancer (not that there is a good form). It has taken almost 3 years just to put enough data together to apply to the FDA for the Human critical trials phase of the research. The trials will probably take another 3 to 4 years. 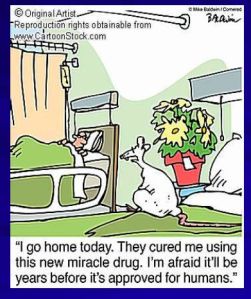 Apparently this snails pace is actually considered to be fast-tracked. If you consider the traditional timeline, the Kanzius Noninvasive Radiowave Cancer Treatment would still have 10 to 15 years before the first human trial.

Is it any wonder why people who can afford to, travel to Europe & the like for treatments that our Mommy FDA is still dragging their collective feet on, making sure everything is 100% safe & effective? Nothing is every completely safe or 100% effective.

If you have late stage terminal cancer, do you really care if a treatment is 100% safe or has side effects? That would be a big fat NO!

If a terminal patient is willing to sign a waiver & have the treatment, what could be a worse side effect than being dead, which they would be anyway. I could never understand that?