The former CNN host and unapologetic leftist, Piers Morgan, has become a great defender of president

Donald Trump. Now he exposes the women of The View, after a visit from Donald Jr, as the lying radical harpies that they are. Good for him!

Even before Donald Trump Jr. appeared on The View yesterday, liberal celebrities were howling their fury.

Will and Grace actress Debra Messing, who hasn’t stopped hysterically raging about all things Trump for the past four years, was incensed the President’s son was even allowed to go on at all.

‘Why would you bring him on?’ she tweeted the ABC show’s Twitter account. ‘You trying to be ‘balanced’?’

You could almost feel the bile laced all over her lips as she spat out the dreaded b-word.

Nobody’s allowed to be ‘balanced’ about President Trump any more.

For vehement anti-Trumpers like Ms Messing only extremely UN-balanced hyper-partisan hatred and revulsion is acceptable.

‘He and his family have assaulted our country,’ Messing continued, ‘our democracy, our environment, our national security, moral compass. Very very disappointing and irresponsible decision.’ 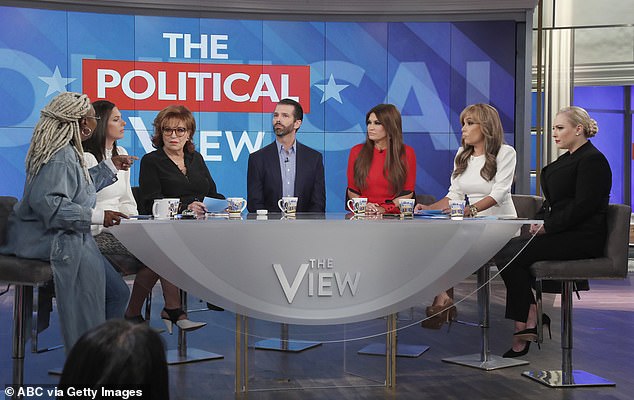 Even before Donald Trump Jr. appeared on The View yesterday, liberal celebrities were howling their fury – and as the showdown went on, things turned fascinatingly ugly

Messing is an expert in disappointing and irresponsible decisions.

A few weeks ago, she demanded the Hollywood Reporter publish the names of everyone attending a Trump fundraiser in Beverly Hills. Her Will and Grace co-star Eric McCormack revealed the sinister motive behind this demand: ‘Kindly report on everyone attending this event, so the rest of us can be clear about who we don’t wanna work with. Thx.’

Ironically, it was View co-host Whoopi Goldberg who reminded Messing and McCormack of the last time the Hollywood Reporter ran a ‘blacklist’ 70 years ago, when it named people in the industry who were suspected of being Communists or sympathizers.