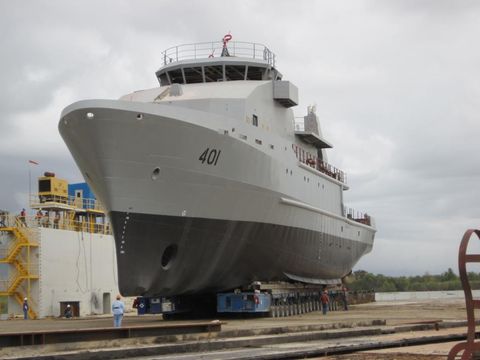 The U.S. Navy plans to buy ten new warships over the next five years that won’t carry any sailors.

These drone ships are designed to carry sensors and weapons. Measuring up to 300 feet long and displacing 2,000 tons, the vessels are meant to extend the sensor range of fleets at sea. The ships will also likely carry weapons, giving the fleet greater firepower and an asset commanders won’t hesitate to send on the most dangerous missions, since that won’t mean endangering the lives of sailors.

According to USNI News, the Navy has budgeted $400 million to purchase two large unmanned surface vessels. The corvette-sized vessels, from 200 to 300 feet long, will operate autonomously at sea without a single human onboard. The U.S. Navy’s budget director describes the ships as the service’s “Ghost Fleet.” The U.S. Navy doesn’t actually have any corvette-sized ships right now, but according to USNI News, early vessels might be based on offshore support vessels such as the ship above, which was delivered to the Iraqi Navy in 2012.