Supermassive black holes patrolling our local region of space may be more common than previously thought after astronomers made a surprise discovery.

A new object with the mass of 17 billion suns has been found in a sparsely-populated area of the local universe, just 200 million light-years from Earth.

This makes it one of the most massive black holes ever discovered, and it’s in a region of space thought to be mostly empty.

A new object with the mass of 17 billion suns has been found in a sparsely-populated area of the local universe, just 200 million light-years from Earth. This sky survey image shows the galaxy NGC 1600 and a Hubble Space Telescope closeup of the bright centre of the galaxy where the 17-billion-solar-mass hole is

The black hole, nicknamed the Beast of NGC 1600, is in a ‘galactic desert’, according to Professor Chung-Pei Ma from the University of Berkeley, California.

She leads the Massive Survey, a study of the largest galaxies and black holes in the local universe.

The study uses a systematic approach to mapping the skies instead of concentrating on obvious galaxy clusters.

The Massive Survey began two years ago to weigh the stars, dark matter, and central black holes of the 100 most massive nearby galaxies.

It targets galaxies larger than 300 billion solar masses and within 350 million light-years of Earth, a region that contains millions of galaxies.

Among its goals is to find the descendants of luminous quasars that may be sleeping unsuspected in large nearby galaxies.

The supermassive black hole found in NGC 1600 is one of the first successes of the project, and Professor Ma says this proves the value of a systematic search of the night sky.

‘Rich groups of galaxies like the Coma Cluster are very rare, but there are quite a few galaxies the size of NGC 1600 in average-size galaxy groups,’ Professor Ma said.

Reporting the discovery in the journal Nature, she explained the unexpected discovery of such a large black hole in a sparse region means these monsters may be much more common than previously thought.

The Coma Cluster is home to the current mass record-holder for supermassive black holes, found by the same team in galaxy NGC 4889 in 2011.

It is thought to weigh 21 billion solar masses, but measurement uncertainty means it could actually be as little as 3 billion suns.

Tracking the movements of stars orbiting the black hole indicates that it might be a binary pair, rather than a single black hole. 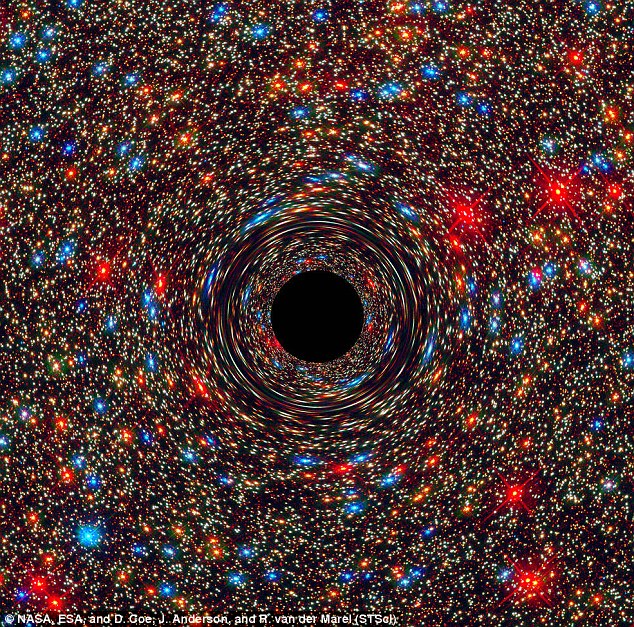 This computer-simulated image shows a supermassive black hole at the core of a galaxy. The black region in the center represents the black hole’s event horizon, where no light can escape the massive object’s gravitational grip. The black hole’s powerful gravity distorts space around it like a funhouse mirror. Light from background stars is stretched and smeared as the stars skim by the black hole.

Binary black holes are thought to occur when two galaxies merge, each bringing a black hole with them.

As they move together they orbit faster and faster, eventually merging into a single black hole.

It was exactly this sort of event that is thought to have created gravitational waves big enough to be recorded by the Ligo experiment in February this year.

A measure of the enormous scale of the NGC 1600 black hole is the diameter of its event horizon – the threshold beyond which not even light can escape its crushing gravity.