In Defense of Pink Slime

By now, we’ve all heard of it, the dreaded Pink Slime. You’ve probably seen it, looking more like soft-serve strawberry ice cream than beef. 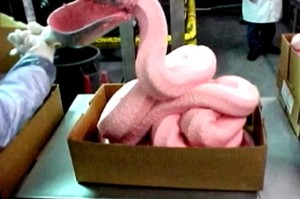 It has suddenly become a hot topic and unfortunately has all but put one company, BPI Industries, out of business.

So why now? Why has this become such a hot topic? Believe it or not, this product has been on the market for over 30 years. It is government approved and has not harmed anybody in all that time.

So now, all the sudden, it has become a danger to humans.

Well, of course it isn’t a danger to humans. I’ve said it before, but it bears repeating. People, with enough time on their hands, will always find something to worry about.

The fact is, the general public doesn’t give a thought to how food is processed and how it

makes to the grocery store shelves.

It is only when the public discovers that not all food comes directly from Old McDonald’s Farm, that they get all panicked and overreact.

“The more people are disconnected with their food supply and the sources of their food, the more questions they will have, and we understand that,” said Craig Letch, director of food safety and quality assurance for South Dakota-based Beef Products Inc. “But, We don’t produce ‘pink slime.’ We produce 100 percent quality lean beef. That’s it. That whole thing is a farce. There’s no substance to it.”

So why the uproar, why the outrage?

Just what is this Pink Slime made of and why has it suddenly become the scourge of the American public?

It is actually 100% beef processed from the trimmings of steaks and roasts, that are delivered to BPI industries.

The trimmings are placed in a centrifuge that spins and removes virtually all the fat from the trimmings leaving behind 94 to 97% lean beef.

That doesn’t sound so bad does it? If that is all it is, what is the problem?

hydroxide and naturally any chemical that is added to our food must therefore be dangerous.

Obviously this is not true. It certainly isn’t true in this case.

Beef already has naturally occurring ammonia in it. Why add more?

Simple. To prevent the growth of the deadly E. coli bacteria. By simply raising the pH level of the meat product with a slight addition of ammonium hydroxide the E. coli bacteria cannot form.

So, as always happens in this country, instead of taking a step back and looking at the facts, the public panics, makes rash decisions and hundreds of people are put out of work.

Only after the damage has been done, are the facts allowed to come out and more often than not, debunk the myth.