From floating spoons and coffins to crabs and pyramids, alien hunters are often reporting strange structures in images beamed back from the surface of Mars.

Now, the latest ‘discovery’ seen using high-resolution images of the Martian surface, a mysterious circle of stones have been spotted on top of a raised mound on the planet.

Dubbed ‘Marshenge’, alien enthusiasts have been comparing it to the famous stone circle at Stonehenge in Wiltshire, England. 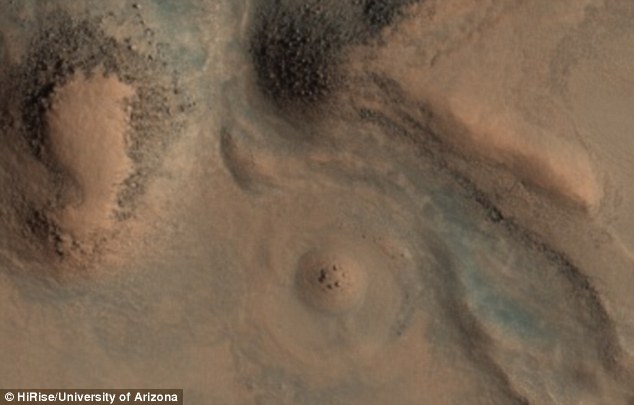 A stone circle that has been compared to Stonehenge has been spotted in images sent back by a spacecraft orbiting the red planet. Dubbed ‘Marshenge’, alien hunters have seized on the images but experts say it could be created by natural processes which cause rocks to be ‘sorted’ in freeze and thaw cycles of permafrost

The strange cluster of stones has already triggered theories that it may have been built by aliens.

However, experts have in the past said such stone circles may form as a result of natural processes that also occur here on Earth.

Many scientists believe that seeing strange objects, such as a ‘coffin’ on Mars, is simple a case of pareidolia.

This is a psychological response to seeing faces and other significant and everyday items in random places.

It is a form of apophenia, which is when people see patterns or connections in unconnected data.

There have been multiple occasions when people have claimed to see religious images and themes in unexpected places, especially the faces of religious figures.

Many involve images of Jesus, the Virgin Mary and the word Allah.

For example, in September 2007 a callus on a tree resembled a monkey, leading believers in Singapore to pay homage to the Monkey god.

Another famous instance was when Mary’s face was a grilled cheese sandwich. Images of Jesus have even been spotted inside the lid of a jar of Marmite and in a potato.

For example, the freeze-thaw cycle of permafrost can cause sediment to churn and separate by grain size that can cause boulders or large rocks to produce stone circles or polygons on low slopes.

The stone circle was highlighted on the Facebook page of a group called Journey to the Surface of the Mars, which regularly pinpoints unusual ‘alien’ features.

In a video posted on YouTube, however, one self-confessed alien hunter calling himself Mr Enigma, said: ‘It looks eerily similar to what we have here on Earth.

‘I’m just saying there is something strange about this area and that it looks very much like the mysterious ancient stones of Stonehenge.

‘Could the builders of Stonehenge have visited Mars and did they build the same thing there or did we have visitors teach us how to build these things and do the same for long lost beings on mars as well, or is this just another face on mars illusion.’