A controversial find could rewrite the history of humans in North America.

Archaeologists claim to have found evidence an unknown species of human was living on the continent as early as 130,000 years ago – 115,000 years earlier than previously thought.

Researchers discovered the butchered remains of an enormous mastodon in San Diego, with evidence of chips and fractures made by early humans – but they admit they don’t know if they were Homo sapiens, Homo erectus, Neanderthals, or something else.

The findings could dramatically revise the timeline for when humans first reached North America, although many researchers are sceptical of the find, claiming there are issues with the dating technique used and ‘many questions’ over the research. 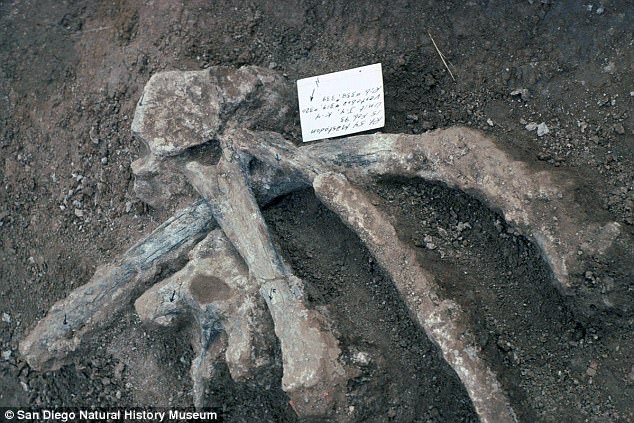 In 1992, archaeologists discovered the fossilised remains of an enormous mastodon in San Diego – a mammoth-like creature that roamed North America 130,000 years ago

The earlier date means the bone-smashers were not necessarily members of our own species, Homo sapiens.

The researchers speculate that these early Californians could have instead been species known only from fossils in Europe, Africa and Asia: Neanderthals, a little-known group called Denisovans, or another human forerunner named Homo erectus.

‘The very honest answer is, we don’t know,’ said Steven Holen, lead author of the paper and director of the nonprofit Center for American Paleolithic Research in Hot Springs, South Dakota.

No remains of any individuals were found.

The mastodon remains were discovered at the Cerutti Mastodon site in San Diego by palaeontologists from the San Diego Natural History Museum during routine work in 1992.

Bones, tusks and molars – many of which had signs that they were deliberately damaged – were found deeply buried alongside large stones that appeared to have been used as hammers and anvils.

Ms Judy Gradwohl, CEO of the San Diego Natural History Museum, said: ‘This discovery is rewriting our understanding of when humans reached the New World.

One comment on “Humans in America Long Before First Thought”