What is it about U.S. Secretaries of State? Are they all just stupid? Or is it that they are all just so much more reasoned and intelligent than us plebes that we just can’t comprehend their genius?

Now, it’s pretty common knowledge that John Kerry believes he may be the smartest man on the planet. I think he is just that egotistical. So much so that I honestly think that Kerry came out of the Iran negotiations believing we actually won, and that he and he alone actually accomplished something momentous and historic.

Oh, he accomplished something historic all right. It was/is so bad, even a child can understand how awful this agreement is. It might be said, in schoolyard parlance, that Iran gave Kerry the biggest Atomic (pun intended) wedgie since Neville Chamberlain. And by the looks of things, he must have enjoyed it.

I don’t believe Kerry is putting on a brave face for the public. I really think he believes he triumphed. That’s just how thick and full of himself he is, that he also thinks Iran can be an ally of the United States.

But he’s not the only Secretary of State to think so. Last October on Meet the Depressed, former Secretary of State Henry Kissinger said: “As long as Iran is ruled by the Ayatollah and bases itself on its sectarian philosophy, we have to be careful. But basically, as a country, Iran is a natural ally of the United States. It’s the ideological, religious component that makes it an antagonist.”

Can I get a DUH for Dr. Kissinger? The ayatollahs have ruled in Iran for now 36 years. What does he mean, “as long as…?” They are now in charge and no one thinks they won’t be in the future! We need to deal with that reality, don’t you think? Not wish it weren’t so.

I wish pigs could fly so I can have bacon delivered, but that’s not reality either.

Another former Secretary of State, James Baker (squishy progressive), “suggested it was possible that Iran could be more involved in the fight against the Islamic state of Iraq and Syria (ISIS). He said Iran is opposed to what ISIS is doing.”

Baker continued by saying, “I wouldn’t be at all surprised if Iran was not helping us quietly deal with some of this.”

Can I get another DUH for former Sec. Baker? Of course they don’t like what ISIS is doing. First, they are competing tribes – Sunni versus Shiite, and second, they (Iran) are supposed to be conquering the Middle East. That is the plan. They sure don’t want any competition.

And now, after this latest volley from Iran – I wonder if these smart guys might change their tune? Over the weekend the ruler of our new ally against terror tweeted the following: 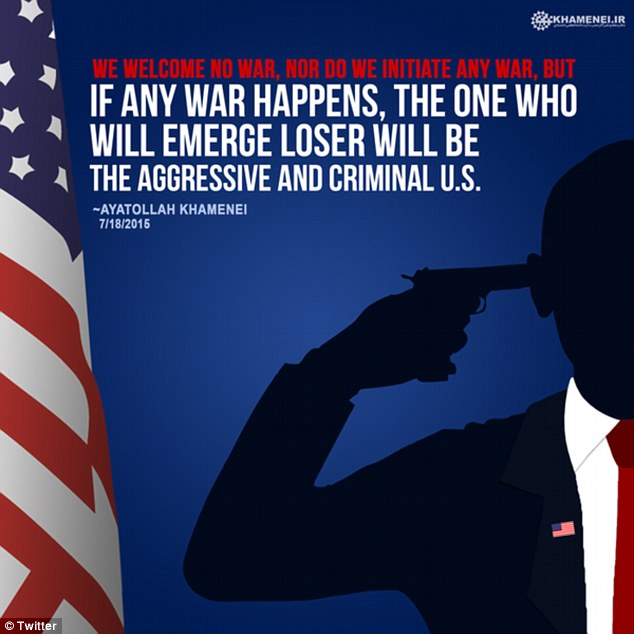 Is it just me? Am I the only one who thinks this Tweet is just a tad bit provocative and aggressive? I mean, I’m not a fan of Obama, but showing a silhouette of him with a gun to his head, and calling us aggressive and criminal is a little out of line, to put it mildly.

They just keep ramping up the vitriol – poking us with a stick. Right after the “historic” agreement was settled on, Iran leader Khameni posted that, “even with #IranDeal, our policies toward US arrogance system will see no change. US policies in the region differ through 180° from Iran’s.”

Even after all this, our genius Secretary of State will more than likely continue to hype the agreement as being good for America, and that we can still work with Iran.