Its attractive red berries, succulent leaves and brightly colored flowers might look like a tasty snack for a hungry herbivore.

But while the berries of the bittersweet nightshade already hold enough poison to put off even the most enthusiastic of grazers, it seems the plant also has another trick to defend itself – ant bodyguards.

The bittersweet nightshade, also called Solanum dulcamara, produces a sugary nectar directly from wounds inflicted on its leaves by animals chewing on them in a bid to attract ants. 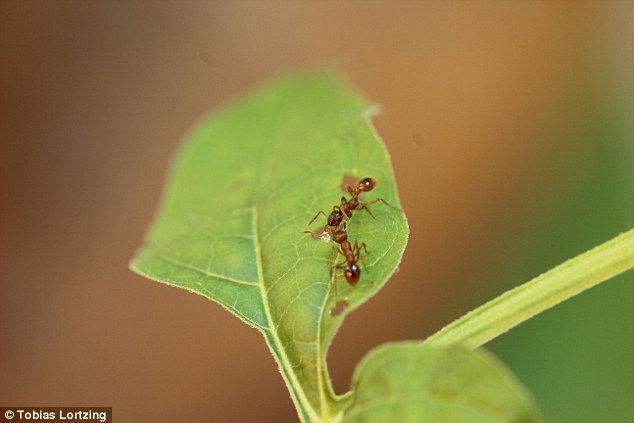 A poisonous woodland plant called bittersweet nightshade has been found to ‘bled’ a sugary nectar from wounds when slugs and insect larvae eat its leaves. These secretions attract three different species of ant (red ants pictured) which attack the herbivores and protect the plant from suffering further damage

These aggressive insects then attack the hapless herbivores in exchange for the sap-like liquid.

Researchers have found at least three species of ants that forage around the plants are attracted by the leaf wound nectar.

THE ANTS THAT FIGHT ELEPHANTS

They are some of the smallest creatures on the African Savannah, but they can also fight off some of the largest.

A tiny species of ant which lives on Acacia trees has been found to combine forces with rival colonies in an attempt to keep elephants and other large herbivores from destroying their homes.

The insects, which colonise the thorny acacia trees, are known to engage in vicious battles with other colonies over territory – but these battles can leave them weakened.

But to combat this apparent weakness, it appears the ants actually team up with their foes to ensure they can still provide a robust attack should their home be targeted by larger animals.

Despite their formidable thorns, some herbivores like elephants and giraffes are still able to devour the plants leaves using their nimble trunks and lips.

But the ants, however, will respond aggressively when they believe their home is being threatened, ferociously attacking any soft tissue.

With elephants, the ants crawl up their trunks and bite them on the inside.

The insects have a painful bite that sends even the largest animals running.

These then drive off creatures such as slugs and beetle larvae that may feed on the plants.

Writing in the journal Nature Plants, Professor Ankie Steppuhn and her colleagues at the Free University Berlin in Germany, said: ‘Plants usually close wounds rapidly to prevent infections and the loss of valuable resources.

‘However, herbivore-inflicted wounds on the bittersweet nightshade Solanum dulcamara appear not to close completely and produce sugary wound secretions visible as droplets.

‘We reveal that ants can defend Solanum dulcamara from two of its native herbivores – slugs and flea beetle larvae.’

Bittersweet nightshade is widespread in its native Europe and Asia but also grows across much of North America where it is an invasive weed.