An enormous black hole lurking at the centre of a recently discovered galaxy has been found to be thirty times bigger than it should be.

Astronomers say the galaxy, which currently has the catchy name SAGE0536AGN, is thought to be around nine billion years old and has a mass of around 25 billion times that of our sun.

Yet scientists have discovered that the black hole at the heart of this galaxy has a mass equivalent to 350 million suns. 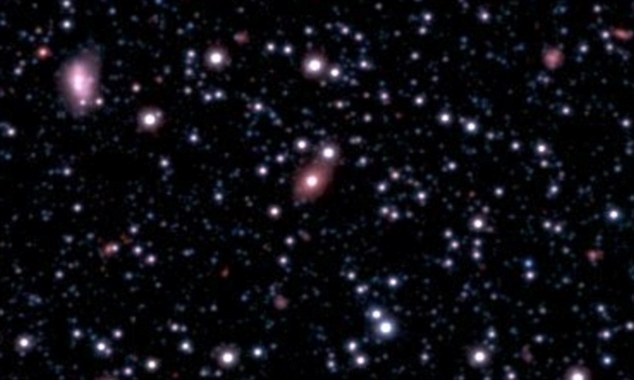 The galaxy SAGE0536AGN (the pink ellipse in the centre of the image above) has been found to have a supermassive black hole at its centre that is far bigger than astronomers had expected. It appears to have grown far faster than the rest of the galaxy and may be a new type of galaxy

This is far larger than it should be for a galaxy of this size, suggesting it has grown far faster than the rest of the galaxy around it.

Researchers say the black hole is gobbling up gas and other material at the centre of the galaxy at an incredible rate.

BLACK HOLES ARE NOT PRISONS

The widely-held assumption is that anything sucked into a black hole is gone forever.

But Professor Stephen Hawking has called this assumption into question.

The theoretical physicist claims to have discovered a mechanism ‘by which information is returned out of the black hole,’ – meaning they may not be as black as first thought.

In fact, his new theory suggests that information lost in black holes could be stored in alternative universes.

Speaking to a group of scientists at KTH Royal Institute of Technology in Stockholm, Professor Hawking talked about finding a solution to one of science’s most difficult questions – what happens to the information about the physical state of things swallowed up by black holes, and is it retrievable?

The laws of quantum mechanics demand that it should be, but that presents a paradox for our current understanding of black holes, known as the ‘information paradox.’

‘I propose that the information is stored not in the interior of the black hole as one might expect, but on its boundary – the event horizon,’ he said.

In most galaxies the supermassive black hole tends to grow at the same rate as the galaxy around it.

Astronomers say SAGE0536AGN could be the first in a new class of galaxies to be discovered.

Dr Jacco van loon, an astrophysicist at Keele University and lead author of the research, said: Galaxies have a vast mass and so do the black holes in their cores.

‘This one though is really too big for its boots – it simply shouldn’t be possible for it to be so large.’

The astronomers, whose work is published in the Monthly Notices of the Royal Astronomical Society, used the Southern African Large Telescope to study the galaxy.

The supermassive black hole at the centre was found to be incredibly bright due to the gas around it being accelerated to high speeds by its immense gravitational field, causing it to emit light.