Scientists have developed camouflage makeup that not only helps soldiers hide from the enemy, but also shields them from the searing heat of bomb blasts – and it’s thinner than a sheet of paper.

The heat-resistant face paint, developed for the US military, has been described as one of the most fundamental changes in thousands of years to camouflage, and could also benefit fire fighters.

The material is tough enough to protect against a thermal blast that can reach 600 degrees Celsius (1,112 degrees Fahrenheit), as hot as a burning cigarette. 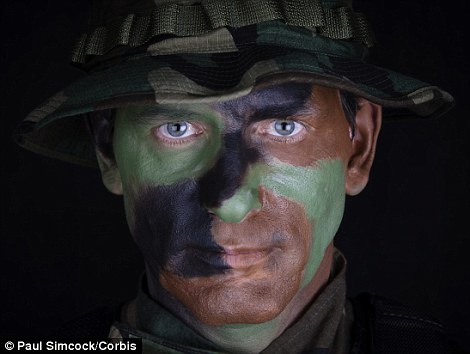 In the near future, camouflage paint could do a lot more than help soldiers hide from their enemies – it could even protect them from bomb blasts

‘The thermal blast lasts only two seconds, but it can literally cook the face, hands and other exposed skin,’ said lead scientist Dr Robert Lochhead from The University of Southern Mississippi.

Dr Lochhead and colleagues set out to find a material that soldiers could smear on their faces like suntan lotion yet protects against heat far hotter than the rays that normally reach the skin. 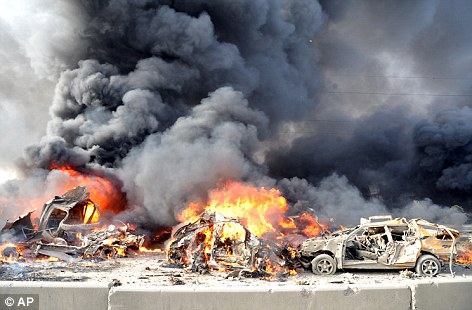 The formulation they discovered lasts far longer than a normal two second blast, generally providing protection for up to 15 second – and 60 seconds in some tests – before its own temperature rises to the point where a mild burn could occur.

The finding raises the possibility that other professions exposed to intense heat, such as fire fighters, could also use a colorless version.

The team had a difficult task in designing the face paint as they could not use traditional makeup ingredients – oil or wax-based face paint – as it can melt on the face and burn the skin when in contact with intense heat.

So instead they turned to non-flammable silicone. 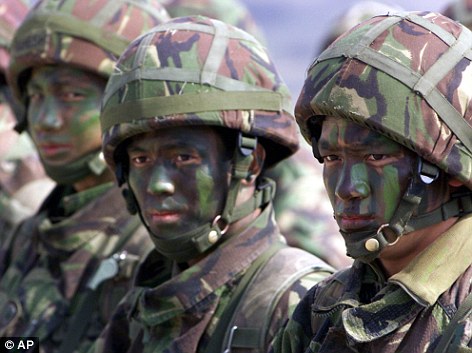 Blend in: Soldiers have used face paint for centuries to shield them from enemies

WHY SOLIDERS ARE AT RISK

Roadside bombs, which have claimed hundreds of lives in Iraq, Afghanistan and other conflicts, produce two blasts.

Firstly, a blast wave at high pressure that spreads out at supersonic speeds and can cause devastating internal injuries.

The new face paint can provide protection against this second blast.

The makeup also had to be waterproof and non-irritating, and, in an extra challenge set by military rules, contain the insect repellent Deet.

‘Deet also is flammable, so when the Department of Defense asked us to incorporate it, we didn’t think we could do it,’ Dr Lochhead said.

Their solution was to encapsulate the Deet in a water-rich material that prevented it catching fire.

The team now plans to test the material on other surfaces to see if it can used to protect clothing, tents and other items from burning.

The study was presented at the annual meeting of the American Chemical Society.