The progressive socialists who want power, so that they can wield it to force the American people to conform to the agenda that they have laid out for us, will not give up. They cannot admit what the President has done to make this country better. They can’t understand or accept that the America people turn away from socialist doctrine that they want so much for us. END_OF_DOCUMENT_TOKEN_TO_BE_REPLACED

Remember those who sacrificed everything so that we may remain free.

END_OF_DOCUMENT_TOKEN_TO_BE_REPLACED

Although it is often overused by us on the right – I’m thankful to be an American. It sounds cheesy and jingoistic. It may be, but

that doesn’t make it any less true, particularly when you know American history and what our forefathers had to go through to achieve it. And no, this will not be a history lesson. Not much of one anyway.

I wish I could travel back in time, not to change anything, but just to thank the founders for what they did, to thank them for their foresight. I’d like to assure them that they did the right thing, that they didn’t go through all that for nothing, that hundreds of years later we are still talking about it, still quoting them and trying to live their ideal. END_OF_DOCUMENT_TOKEN_TO_BE_REPLACED

Let’s talk about another example of democrat symbolism over substance.

California state legislators passed a resolution demanding that president Trump and Congress apologize for separating families at the border. But would an apology be just a first step to something more?

A federal district court judge, administering the oath of citizenship, tells the new Americans to “take a knee” in protest. Yes, that’s what a citizen wants hear. Welcome to America new citizen. Too bad the country you chose is so awful. END_OF_DOCUMENT_TOKEN_TO_BE_REPLACED

We are the worst country on the planet. At least we are according to the radicals on the left.

Funny thing about being the worst. When you are the worst, not many will gravitate toward you. If we are truly the worst, most racist, most homophobic, anti-immigrant, misogynist nation, no one with even half a brain would want to come here legally, much less sneak in under threat of arrest and imprisonment.

But the facts don’t support the left’s amplification of outrage. The facts do support that America is the most attractive nation on the planet, as demonstrated by the fact that everyone wants to get in and no one wants to leave. Not even the wacky Hollywood leftists who vowed to do so should Trump get elected. We’re still waiting, by the way.

No other nation is even close. The only reason Europe has had such a large influx of immigration is strictly due to geographic proximity. If the United States was closer to the Middle East and Africa, they would all choose to come here.

The United States is the only place on earth where you can immigrate here, legally, and if you go through the right channels, you can become an American. Not just a citizen, but an American. END_OF_DOCUMENT_TOKEN_TO_BE_REPLACED

Let’s celebrate America with something that Lloyd Marcus, the unHyphenated American, put together. Thanks to Fred the Joke Man for bringing this to me.

END_OF_DOCUMENT_TOKEN_TO_BE_REPLACED

On this podcast I’ve elected to skip the political commentary and focus this Memorial Day weekend on several recipients of the Congressional Medal of Honor, our nation’s highest military honor.

I’ve chosen at least one hero from World War I, World War II, the Korean War, Vietnam and present day.

from The Washington Free Beacon:

Nearly three-quarters of young Americans are ineligible to serve in the United States military due to obesity, criminal record, or lack of education, according to a new report by the Heritage Foundation.

The contracted pool of Americans aged 17 to 24 who are fit to enlist in the armed services poses an “alarming” threat to national security and risks derailing the Trump administration’s path to rebuilding a depleted military, the report found, citing Pentagon data.

The Pentagon estimates that 24 million of the 34 million Americans between 17 and 24 years old, or 71 percent, are unable to serve. END_OF_DOCUMENT_TOKEN_TO_BE_REPLACED

President Trump says he has an interest in a military parade in Washington D.C. sometime in the future. 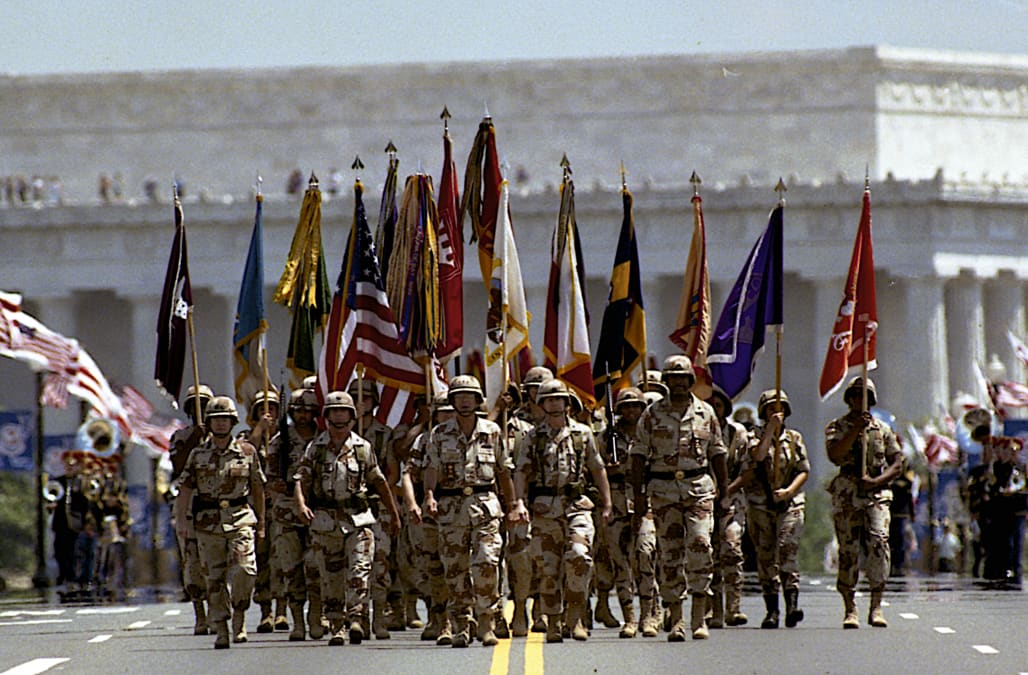 Fox Business reported on it.

“President Trump is incredibly supportive of America’s great service members who risk their lives every day to keep our country safe. He has asked the Department of Defense to explore a celebration at which all Americans can show their appreciation,” White House Press Secretary Sarah Huckabee Sanders said in a statement.

First, I don’t think it really serves any purpose. Those who love and respect the military already do, and show it as often as we can – and you’re not going to change the minds of leftists. Also, in my humble opinion – those who can’t fight, parade, those who can, don’t need to parade.

Personally I hated wearing my dress uniforms. Heck, I don’t care for wearing a civilian suit. Most of our military are lunch-pail, fatigue wearing fighting men and women. They are not accustomed to goose-stepping down some city street like so many dancing monkeys, on display for their civilian overlords. END_OF_DOCUMENT_TOKEN_TO_BE_REPLACED

I liked to introduce you all to man who long ago fell in love with America – the idea and ideals of our great nation.

His name is Jonathon Dunne and he is a foreigner, from Ireland. He’s also a man who has been trying to come here with the “dream” of becoming an American. But, surprise, surprise – he refuses to sneak into our country like so many millions have. He actually has principles and says he loves America too much to defile it in such a way.

I’ll tell you his story and more, as I discuss my favorite topic – illegal immigration. I think I kept it to one official melt-down this time. END_OF_DOCUMENT_TOKEN_TO_BE_REPLACED