But her fans are said to be “disgusted” that Kim Kardashian, who is a self-made gazillionaire, gave her daughter a jacket she won at auction.

I mean – come on! She gave her daughter a used coat? Like she can’t afford to buy a new one?

Obviously I’m joking, because she could buy Macy’s if she felt inclined.

The jacket was a Christmas gift for her daughter North, by Northwest. Oh … my apologies. That was an Alfred Hitchcock movie starring Cary Grant. Ms. Kardashian’s daughter is just named North … North West. Just as ridiculous.

Okay, so this wasn’t just any jacket as you might imagine. It belonged to Michael Jackson. And it wasn’t just any Michael Jackson jacket. It was his “Thriller” jacket – black leather with … uh … silver looking stuff all over it. Maybe silver and rhinestones? I don’t know. Oh, and she paid a mere $65,000 for it. END_OF_DOCUMENT_TOKEN_TO_BE_REPLACED 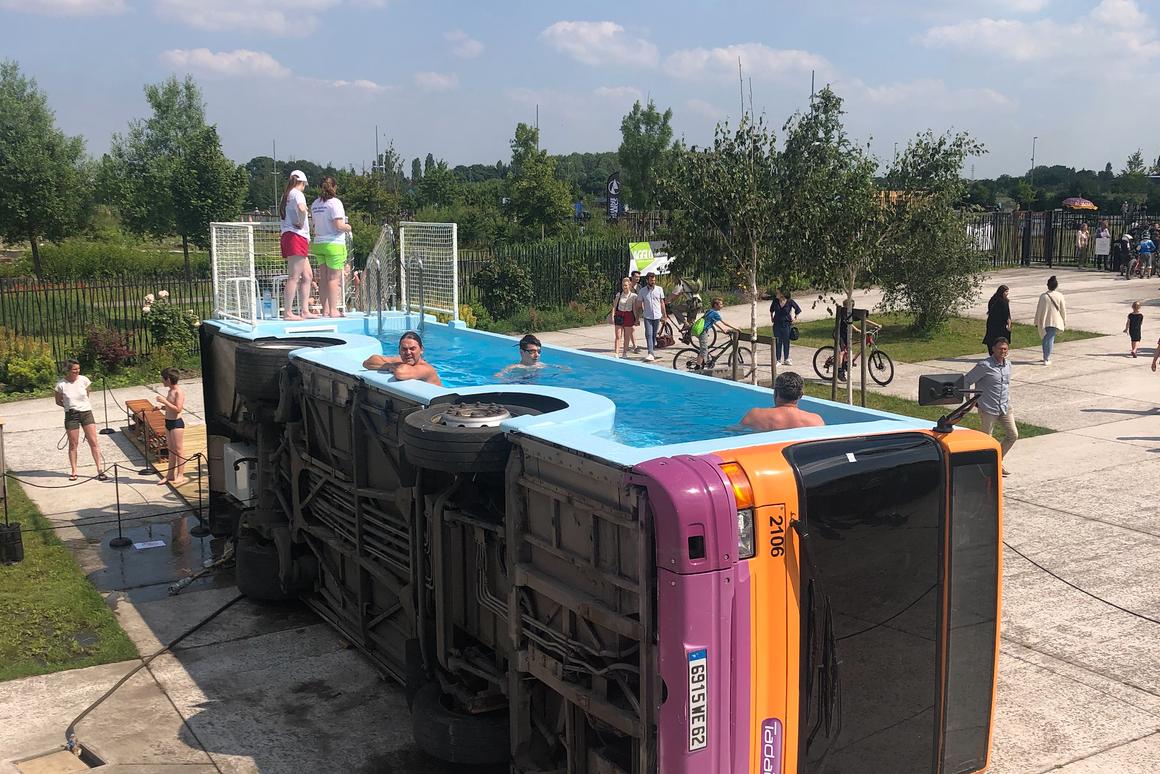 French artist Benedetto Bufalino has spent years turning everyday vehicles like caravans and cars into art installations. His latest project involved transforming an old bus he found at a local junkyard into a swimming pool. END_OF_DOCUMENT_TOKEN_TO_BE_REPLACED

Proving once again, that no matter how liberal one is, particularly in Hollywood, there will always be those who are that much more leftist.

Oscar-winner Leonardo DiCaprio, who has one of the most successful careers in movies these days, must “start rethinking” his career, according to America’s Woke Fascists.

Yes, that’s right, even Leo can no longer be allowed to choose his own directors and creative partners.

You see, he hasn’t worked with a female director since 1995, and although his collaborative decisions have brought him super stardom, an Oscar, and a canon of work anyone would be proud of, it is time for Leo to do some affirmative-action hiring and work with not-a-straight-white-guy. END_OF_DOCUMENT_TOKEN_TO_BE_REPLACED

Chuck Norris is a man of many skills, both real and mythical. We’re definitely sure he’s a decorated Air Force veteran, a martial arts master, an accomplished actor, and a sage philosopher. And we’re pretty sure he once beat the sun in a staring contest, punched a cyclops between the eye, uppercutted a horse and created giraffes, and counted to infinity—twice. Now we can add HISTORY host to his ever-expanding résumé. END_OF_DOCUMENT_TOKEN_TO_BE_REPLACED

The B-17 “Flying Fortress” is one of the most iconic aircraft of World War II. Built by Boeing, the four-engine bomber was the United States’ primary weapon of destruction in the air campaign to annihilate cities and bring Nazi Germany to its knees. Its combat performance was decidedly uneven, yet no one questions its primacy in the war. END_OF_DOCUMENT_TOKEN_TO_BE_REPLACED

Fresh out of Weight Watchers or Jenny Craig, the next crop of marvel Super Heroes will be gay and overweight. After a long string of can’t miss box office smashes, it seems Marvel Studio’s new goal is to go from first to worst. can’t wait to see Kevin James in spandex and a cape.

Phase II of the Marvel comic book cinematic universe is going to involve a few less of our classic superheros in favor of a bold new array of diverse and inclusive characters. Yes, Marvel’s going a lot more ethnic, and a lot more gay because what’s cooler than finding out that your new favorite Avenger enjoys his skintight latex suit for far more than just crime-fighting purposes? END_OF_DOCUMENT_TOKEN_TO_BE_REPLACED

Up here in the Northeast, it’s technically Spring, put the weather is lagging the calendar. But soon it will be yard/garage sale season. So let’s all get out there and hope for the best.

$100 antique discovered at garage sale auctioned off for $2.1 million at Sotheby’s

Antique dealers at the garage sale missed the 1,000-year-old gem

A battered Chinese statuette picked up at a Midwest garage sale for $100 was auctioned off at Sotheby’s for a stunning $2.1 million.

The bronze Buddha, which is thought to be over 1,000 years old, skyrocketed past its estimated sale price of just $80,000 in a frenzied seven minutes’ bidding at the auction house in New York. END_OF_DOCUMENT_TOKEN_TO_BE_REPLACED

Students who say ‘Baby, It’s Cold Outside’ is ‘suggestive’ are asked if misogynistic rap should be banned. The hypocrisy is glorious.

Cabot Phillips of Campus Reform visited George Mason University in northern Virginia recently to ask students what they thought of the controversy over the classic holiday song, “Baby, It’s Cold Outside” — specifically if it’s the right move to ban the tune over lyrics that suggest a man is seducing a woman against her will.

The reactions were mixed. Some woke students were all for banning the song; others believed the dust-up has been overblown. END_OF_DOCUMENT_TOKEN_TO_BE_REPLACED

CBS has reporter cancelled the Murphy Brown reboot after a single season. Shocking – no one wanted to watch another show about angry leftists.

The preachy, unsubtle “Beat the Press” storyline features one of her reporters — Frank Fontana (Joe Regalbuto) — brutally beaten by a “sea of red hats” at a rally for President Donald Trump and subsequently hospitalized.

Special: Famous economist: Why a crash is simply inevitable at this point