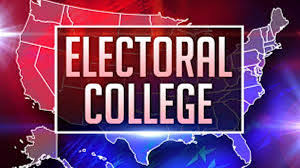 The left is masterful at the art of reframing. Just pick any unpopular or radical narrative or initiative and you can bet the left has somehow attempted to reframe it to make it seem or sound more palatable. Or if something comes from conservatives, or worse, the founders or any of the documents they crafted, you can bet the left has reframed it to make it sound horrible, racist and uninclusive.

Since Bush v. Gore in 2000, the left has been on a tear to rid us of the Electoral College.

Their reasoning is the same today as it was two decades ago. How could the Democratic candidate win the popular vote, but still lose the election?

So you can bet that this time will be an all-out assault on the fairest way to decide a presidential election – the Electoral College.

Last year, Darrell M. West for the Brookings Institute wrote that it was time to abolish the Electoral College.

“For years when I taught campaigns and elections at Brown University, I defended the Electoral College as an important part of American democracy,” West wrote.

Words mean things, especially to an academic, so it’s a sad state of affairs when a guy who is the vice president and director of Governance Studies describes America as a democracy, rather than what we’ve always been, a representative republic.

After that revelation, I decided to read no further. This gentleman is obviously not stupid; therefore, he is a leftist who purposely refers to our form of government as a democracy in order to reframe the presidential election process.

The last straw for the left was when Trump secured a victory over Hilary Clinton despite losing the “popular vote” by millions.