[Editorial Comment: The following was not a prepared speech. It was completely extemporaneous. There was no script, no teleprompter, no blackberry and no one speaking into his ear telling him what to say. You tell me who the REAL conservative is.]

From: The Weekly Standard:

In the back room at the Flight Deck restaurant Tuesday afternoon, a voter posed an interesting question to Rick Santorum. What is Santorum’s own view of the Constitution, 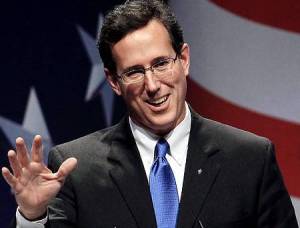 the voter wanted to know, given that Ron Paul frequently casts himself as the only candidate who wants to adhere to the Constitution? In response, Santorum fished out of his pocket his miniature copy of the Constitution and held it tightly in his hand.

“I have a very good grasp of the Constitution,” Santorum joked. Then the former senator from Pennsylvania got serious, describing his own philosophy on the Constitution and contrasting it with Paul’s.

Ron Paul has a libertarian view of the Constitution. I do not. The Constitution has to be read in the context of another founding document, and that’s the Declaration of Independence. Our country never was a libertarian idea of radical individualism. We have certain values and principles that are embodied in our country. We have God-given rights.

The Constitution is not the “why” of America; it’s the “how” of America. It’s the operator’s manual. It’s the rules we have to play by to ensure something. And what do we ensure? God-given rights. And so to read the Constitution as the end-all, be-all is, in a sense, what happened in France.

“You see, during the ti

me of our revolution, we had a Declaration of Independence that said, “We hold these truths to be self-evident, that all men are created equal, [that they are] endowed by their Creator with certain unalienable rights, that among these are life, liberty and the pursuit of happiness.”

So we were founded as a country that had God-given rights that the government had to respect. And with those rights come responsibilities, right? God did not just give us rights. He gave us a moral code by which to exercise them.

See, that’s what Ron Paul sort of leaves out. He leaves out rights and responsibilities that we have from God that this Constitution is to protect. And he says, “No, we just have rights, and then that’s it.” No, we don’t. America is a moral enterprise….

I think, constitutions, but their constitutions were initially patterned after the American Constitution. Gave radical freedom, like ours does.

But their founding document was not the Declaration of Independence. Their founding watchwords were the words, “liberty” and “fraternity.” Fraternity. Brotherhood. But no fatherhood. No God. It was a completely secular revolution. An anti-clerical revolution. And the root of it was, whoever’s in power rules.