The following article was posted by Ryan Lizza at The New Yorker website. At first blush, I was surprised at his myopic view, but then I awoke from my conservative dream-state to recall the source of the piece. Liberals are a mixed up, illogical bunch.

As is my want, I have added editorial comments in [ ].

If tonight’s reporting is correct [ which,of course, it was ] , and if Mitt Romney really does announce at 9 A.M. Saturday that Congressman Paul Ryan of Wisconsin is his running mate, Romney has made the most daring decision of his political career. [Daring? Ryan is a great choice but daring would have been Rand Paul or Allen West]

After spending weeks looking into Ryan’s history for The New Yorker, visiting his home town, and interviewing him twice, I am genuinely surprised that Romney chose him. First, let’s tally the risks of a Ryan pick. [ No,  first let’s ask why NO ONE ever did the same regarding our dear president. No one was (or is) even the slightest bit curious about him ]

For one thing, Ryan has no significant private-sector experience. Besides summer jobs working at McDonald’s or at his family’s construction company, or waiting tables as a young Washington staffer, Ryan has none of the business-world experience Romney frequently touts as essential for governing. In the run-up to his first campaign for Congress, in 1998, that gap was enough of a concern for Ryan that he briefly became a “marketing consultant” at the family business, an obvious bit of résumé puffing. [ Ok, come on now. Even he couldn’t have written this with a straight face. Private-sector 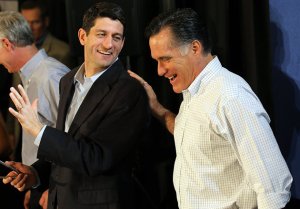 experience? Really? Do the names Barack Milhous Obama and Joe Plugs Biden strike a familiar note? My 13-year-old son worked as a camp counselor trainee for 15 days this summer. He now has more private-sector experience than Milhous and Plugs combined. ]

But Ryan’s Washington experience is also light, at least for a potential President—which, after all, is the main job description of a Vice-President. Ryan has worked as a think-tank staffer and Congressman, but he’s never been in charge of a large organization, and he has little experience with foreign policy. Given how Sarah Palin was criticized for her lack of such experience, I’m surprised that Romney would pick someone whose ability to immediately step into the top job is open to question. [ This is comedy gold. A) Washington experience? Obama had 144 work days in the senate from the time of his election until he formed his presidential campaign. B) Are ACORN or the Black Panthers considered large organizations? C) Foreign Policy experience? Obama had exactly zero (other than possibly being a foreign national. Hah! Couldn’t resist) and Biden’s expertise is being wrong about everything ] 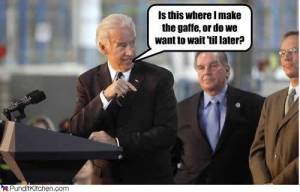 And the experience that Ryan does have is not exactly what voters are clamoring for at the moment. The bulk of Ryan’s House career coincided with the Presidency of George W. Bush, during which he was a reliable vote for many Bush policies that have not aged well: Medicare Part D; the Iraq War; and the Troubled Asset Relief Program. Ryan told me that voting for all of that spending, which added trillions to the deficit, made him “miserable,” but he’ll need a better explanation in his October debate with Joe Biden. [ Wow! Something we agree on. To say I didn’t care for the Medicare & TARP programs is an understatement, but those programs will look like a trip to the Dollar Store compared to the cost of Obamacare. Debating Joe, the gaffe machine, Biden? Biden is one of the dimmest bulbs to hold that or any other office ]

Presumably, Romney’s main reason for picking Ryan is not his early deficit-busting record but his more recent rise to celebrity as a crusading policy wonk determined to tame the federal government. Romney, who has been extremely vague about what he would do if elected, will now own Paul Ryan’s ideas, which include privatizing Social Security, turning Medicare into a voucher program, bloc-granting and drastically cutting Medicaid, and reducing discretionary spending to levels that would affect every popular government program. This Ryan agenda will now fill the vacuum created by Romney’s unwillingness to lay out the specifics of his own plan. Even before this (apparent) announcement, Democrats were planning on tying Romney to Ryan’s policy platform. Now Romney has

done it for them. [ Possibly saving Social Security by privatizing it, √. Getting people more involved in their own Medicare decisions, √. Block granting to the states to allow them to be more efficient , thus saving money, √. Reducing discretionary spending, another word for waste, fraud and abuse, √ . Nature abhores a vacuum. It can either be filled with big government, progressive spending or free-market capitalism. I hope Romney owns it! ]

So what’s the potential upside? Romney seems to have realized that his spring and summer strategies have been a failure. Since winning the nomination, Romney’s plan has been to turn the election into a simple referendum on Barack Obama. With the ailing economy, Romney believed, he needed to do little more than stand around and wait for voters to sour on the incumbent. When they did, Romney would be there as the default alternative. In recent weeks, as Romney’s favorable ratings declined, some encouraging economic news dribbled out, and Obama’s poll numbers ticked up, a loud faction of Republicans began pointing out that Romney’s theory of the campaign was wrong. Their argument was that Romney needed to turn the race into more of an ideological debate. He needed, these Republicans said, to embrace a bold policy agenda that would dramatically

contrast with Obama’s. Nobody made this case more loudly than Paul Ryan. Presidential candidates shouldn’t “run on vague platitudes and generalities,” he told me in one interview. “I want a full-throated defense for an alternative agenda that fixes the country’s problems,” he said in another. [ Referendum on the One? You got that right. That’s exactly what this is. I hope and believe Romney understands the people already in his corner would never vote Obama and the rest aren’t paying attention yet anyway. And it’s only been a failure to those pundits and hacks who believe their own heavily skewed polls. Now they have the ticket, it’s time to go on the attack ]

Romney’s choice of Ryan will undoubtedly be criticized as capitulation to the right, and this pick does seem to demonstrate that Romney is not able or willing to distance himself from the base of his party. But the good thing about the Ryan pick is that the Presidential campaign will instantly turn into a very clear choice between two distinct ideologies that genuinely reflect the core beliefs of the two parties. And in that sense, Romney’s choice of Paul Ryan is good news for voters. [ I hope he knows what side his bread is buttered. The right, the Tea Party, the real conservatives are the ones that have done all the heavy lifting to try to wrest control away from these tyrannical overlords. So far we’ve done a pretty fair job and I’m sure he see’s that.  I feel fairly confident he does ]