A piece of silicone rubber imprinted with super-thin material that generates electricity when flexed could provide a source of power for mobile and medical devices (Image credit: Frank Wojciechowski)

Engineers from Princeton University have developed power-generating rubber films that could be used to harness natural body movements such as breathing or walking in order to power electronic devices such as pacemakers or mobile phones. The material, which is composed of ceramic nanoribbons embedded onto silicone rubber sheets, generates electricity when flexed and is highly efficient at converting mechanical energy into electrical energy. END_OF_DOCUMENT_TOKEN_TO_BE_REPLACED

Injecting white blood cells with a special protein transforms them in to ‘super natural killer cells’, that can wipe out cancer, experts have revealed.

The specially engineered cells have the ability to seek out diseased cells in lymph nodes, with one purpose: destroy them.

The breakthrough by biomedical scientists at Cornell University, could stop the disease in its tracks, by preventing it from spreading.

‘We want to see lymph node metastasis become a thing of the past,’ said Michael King, the Daljit S, and Elaine Sarkaria, professor of biomedical engineering and senior author of the paper. END_OF_DOCUMENT_TOKEN_TO_BE_REPLACED

The unique way in which our fingertips can detect changes in both temperature and pressure have been reproduced in an electronic ‘skin’.

In tests, the grooves in the e-skin were able to respond to water droplets running across them and could detect when a human hair was placed on their surface.

The breakthrough could be used to make more life-like prostheses or improve the accuracy of wearable sensors and medical diagnostic devices. 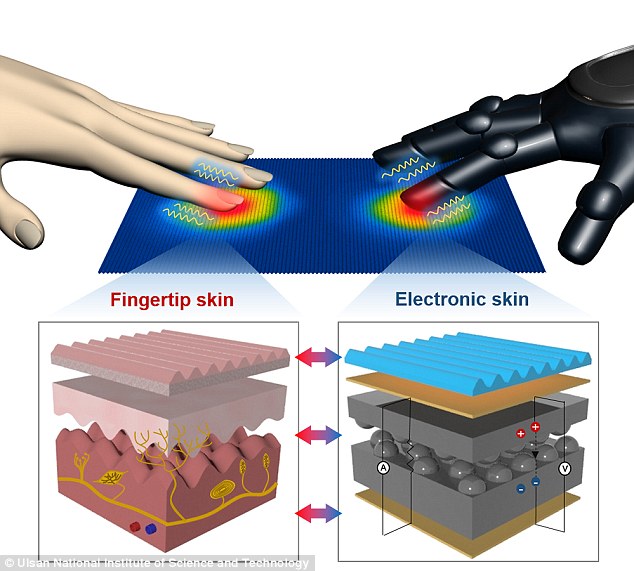 The electronic skin (illustrated) was developed by researchers at the Ulsan National Institute of Science and Technology, led by Professor Jonghwa Park. By adding composites made of a polymer and reduced graphene oxide, the films are able to detect touch and temperature using sensing electric charges

END_OF_DOCUMENT_TOKEN_TO_BE_REPLACED

A protein patch has been shown to regenerate heart tissue in animals (Credit:Shutterstock)

Though sufferers of heart attacks may survive the initial event, they cause permanent damage to the organ in the form of scar tissue, which affects its ability to pump blood. Scientists around the world are working on this problem, with hydrogels, human stem cells and even bioengineered tissue that sticks together like Velcro all offering possible solutions. END_OF_DOCUMENT_TOKEN_TO_BE_REPLACED

A mechanical hand utilizing DARPA-developed neural technologies has become the first to allow a paralyzed patient to feel physical sensations through a prosthesis. END_OF_DOCUMENT_TOKEN_TO_BE_REPLACED

Food allergies have been on the rise in recent years. Some reports show that as much as 10% of children in developed nations are affected. And peanut allergies seem to be the most prevalent.

Searching the Internet, one can find dozens of near death allergic reactions to peanuts – and a lot of these experiences center around airlines and the ubiquitous bag of complementary salty treats.

In August 2013, a woman and her son refused to board a United Airlines flight from Denver to Newark due to her nine-year-olds severe peanut allergy. It seems the agent at the gate told the mom that “the crew would not make an onboard announcement about Joshua’s allergy.”

The mother, Lianne Mandelbaum “had seen other passengers eating peanuts while waiting to board, and she concluded that the flight would be dangerous for Joshua.”

A few months later she launched a website, asking “that airlines ‘institute a bill of rights’ for food allergic passengers. Those rights would require airlines to create buffer zones, of at least three rows in front and three rows in back, of the row where an allergic passenger is seated. Airlines would not serve products containing nuts within the buffer zone. Also, flight crews would ask passengers in the zone to refrain from eating any products with nuts.”

Well that’s all fine and good, but then I found this. Just last week, on a Ryanair flight, “a group of passengers were converging menacingly on a Zimbabwean man they accused of trying to kill” a four-year-old girl. END_OF_DOCUMENT_TOKEN_TO_BE_REPLACED

Five men with complete motor paralysis have regained the ability to move their legs voluntarily and produce step-like movements after being treated with a non-invasive form of spinal cord stimulation. The new treatment builds on prior work to generate voluntary movements in paralyzed people through electrical stimulation – in particular, two studies (one completed in 2011, the other in 2014) that involved surgically implanting an electrode array on the spinal cord. This time, however, the researchers found success without performing any invasive surgery. END_OF_DOCUMENT_TOKEN_TO_BE_REPLACED

According to the American College of Rheumatology, more than one million Americans suffer from rheumatoid arthritis. The disease gives rise to swelling and pain by causing the immune system to malfunction and attack healthy tissue. No cure is available, though aggressive and varied drug treatments can curb its effects. Now, success in an early clinical trial suggests that a new form of therapy could stop these symptoms taking hold by retraining the patient’s immune system to ignore a peptide it normally identifies as a foreign foe. END_OF_DOCUMENT_TOKEN_TO_BE_REPLACED

By adding a bit of gold, artificial muscles can be made from these things (Photo: Shutterstock)

Artificial muscles could one day revolutionize fields such as robotics, prosthetics and nanotechnology. So far, we’ve seen examples made from materials like electroactive elastomers, crumpled graphene, and vanadium dioxide. The problem is, most artificial muscles can only expand in one direction, or contract in the other. Now, however, scientists from National Taiwan University have gotten around that limitation using gold-plated onion cells.

END_OF_DOCUMENT_TOKEN_TO_BE_REPLACED

Scientists are increasingly looking at using medication-filled microspheresfor targeted drug delivery within the human body. Silicone would be a particularly good building material for such spheres, as it’s biocompatible, waterproof, and chemically stable. END_OF_DOCUMENT_TOKEN_TO_BE_REPLACED